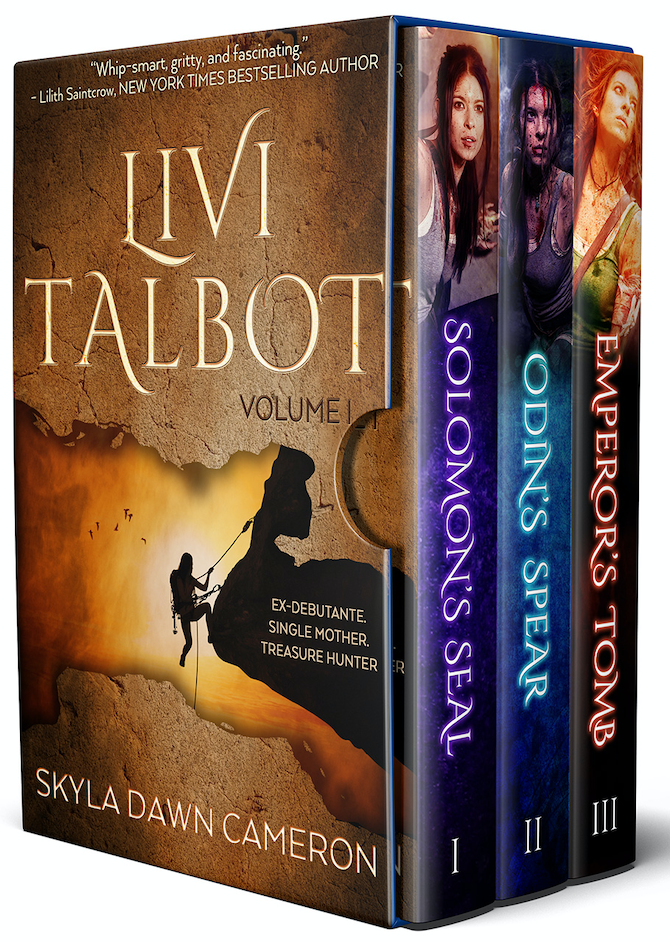 Disowned and left penniless for getting pregnant as a teen, former celebutante Olivia Talbot was willing to do whatever it took to provide for her daughter…including become a treasure hunter. Since the Pulse hit, activating relics of legend, there are plenty of artifacts to be had—not to mention wealthy clients willing to pay top dollar for them.


Join Livi Talbot in the first volume of her adventures--three novels and one novella.

In Solomon's Seal, just as her daughter’s private school tuition cheque bounces, Livi gets an offer that could be the break she needs to return to some semblance of her former life. A potential new client wants her to travel to Ethiopia and retrieve the Seal of Solomon—a mythical ring said to control demons and djinn—and this bounty comes with one hell of a financial pay off.

In Odin's Spear, after nearly losing her family and her life, Olivia Talbot is trying to leave the world of artifact hunting behind. But an adrenaline junkie unsuited for a 9 to 5 job can’t hide herself forever, especially when deadly operative Dale West comes knocking with off-book work for his covert organization.

In the novella Ashford's Ghost, Livi's house is haunted, and she’s starting to think the ancient murderer she used the Seal of Solomon to destroy might not be entirely dead after all. Isolated in the house by a violent snowstorm, Livi is trapped with a dark force gathering strength by the hour, threatening not only the safety of her family but possibly her very sanity.

In Emperor's Tomb, at the end of a well-earned vacation, Livi Talbot is ready for more work. She just didn’t expect “work” to be a call from a friend suffering a small case of blackmail. One short Australian heist later, a simple retrieval becomes a tangle of sacred mountains, dangerous tombs, a fellow treasure hunter’s disturbing hotness, murderous sea monsters, and life-threatening danger.